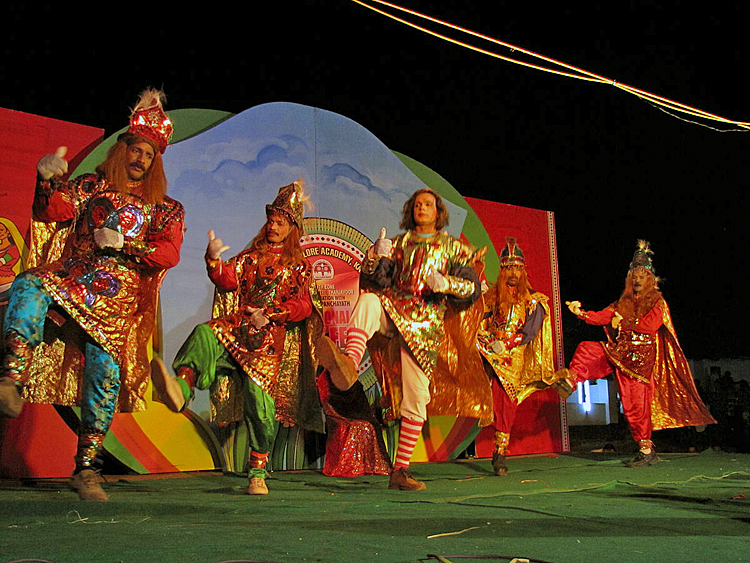 Chavittunatakam is a unique and energetic performing art tradition of the Latin Catholics of Kerala that combines both Western and Eastern theatrical concepts and practices. Latin Catholics are mostly the locals along the coastline of Kerala who were converted to Catholicism by the Portuguese missionaries.

It is quite intriguing that these performances that articulate stories of Christian legends and medieval European kings were performed during the colonial period by men and women from the southwestern shores of India. These performers were clueless about the Western operatic traditions or stories of medieval kings and queens of Europe. It was indeed a bequest of trade winds.

Christos e espiciarias! (For Christ and for spices!) cheered the exuberant sailors of Portuguese explorer Vasco da Gama’s fleet when they anchored on the shores of Kerala on May 20, 1498. However, this proclamation was totally uncalled for; Syrian Christians were already a well-established and flourishing community in Kerala. According to Christian tradition, the apostle Saint Thomas arrived in Kerala in 52 A.D. and converted many locals to Christianity.

Two years after da Gama’s arrival, Captain Pedro Álvarez Cabral followed, bringing several Franciscan priests, chaplains, and a chaplain major. He left some of them behind, who converted the locals to Latin Catholicism. These missionaries believed that south Indian Christianity differed from their more orthodox religion. Their mission was to teach religious customs approved by the Roman papacy and impart a distinct identity to the newly converted Catholics. The missionaries found dramatic and folk arts as an effective way of appealing to the locals. To lure more converts to Latin Catholicism, they developed an art tradition with the help of locals by combining Western and Eastern art heritages and using local warriors as dancers.

In 1503 A. D. Alfonso de Albuquerque, with the permission of the king of Kochi built Fort Immanuel and within the fort erected a church with wood and dedicated it to St Bartholomew. That was the first European Church in India. Later another monumental house of Worship, Santa Cruz Basilica, was built by the Portuguese. Kochi became Kerala’s first and India’s second Catholic diocese in 1558 and the church was elevated to a Cathedral by Pope Paul IV. During the Colonial era, the Portuguese built several more churches and succeeded in establishing the Roman Catholic Church as a dominant church of Kerala.

The word Chavittu means steps and Natakam mean drama. A unique feature of this drama is that during the performance the artists produce rhythmic resonant sounds by stamping (chavittu) methodically on the stage. Traditionally chavittunatakam presented stories based on the heroic episodes adopted from the Bible and Christian kings of the early or medieval Europe.

In old days, the play was performed on open stage. Sometimes the interior of a church was used as a venue. Chavittunatakam was quite popular among the Christian communities living around old ports and coastal centers where Portuguese influence prevailed. It was performed twice a year at Easter and Christmas. People considered it an honor to be selected as an actor and their families generously offered their financial support.

The performance stage was large, measuring 36 feet in width and 135 feet in length. The floor was erected with narrow wooden plank arranged in such a way as to produce loud sound when performers stamped on stage.

These plays were not staged in their pure European form. They were an amalgam of Western operatic costumes and aesthetics of European opera, combined with facial expressions of Indian performing arts such as Kathakali, Koodiyattam, Koothu, Mohiniyattam and elements of Kalaripayattu, the celebrated martial art of Kerala, originally practiced by the hereditary warriors of the region.

Legend has it that the original composer/teacher/director of chavittunatakam was a Chinnathambi Annavi. He is said to have come to central Kerala from Tamil Nadu and lived in Kochi and Kodungallor for seventeen years and was the composer, teacher, and director of several chavittunatakams. Some believe that he was a Portuguese missionary who knew Tamil. There are no existing records about him apart from the stories the villagers recount. In 2013 the state paid tribute to Chinnathambi Annavi by unveiling his first-ever statue.

The central figure of the chavittunatakam group is the teacher/director called Aasan, also called Annavi, out of reverence for the original teacher Chinnathambi Annavi. Until a half a century ago men and women were selected by the aasan and were trained at the kalari (school). These names, aasan and kalari, are obviously derived from the Kalaripayattu tradition where students are trained at kalari by their aasan.

Chavittunatakam attributes great importance to the Chuvadi which codifies rituals performed at the start up to the actual performance. The original chavudis were composed in old Tamil (precursor of Malayalam language). Started as an oral tradition, it later evolved into palm leaf documents in Vattezhuttu, the earliest script used to write Malayalam, the language of Kerala. Later works are written in a mix of Tamil and Malayalam. Names of early authors are unknown as they were often stated as servant of Jesus or servant of Mary. The chuvadis are considered personal property of the teachers and handed down from generation to generation by the aasan to a favorite student or his offspring.

Royal attires and ornamental costumes are essential for this drama. The artists wear glittering costumes that resembles European costumes of the medieval period. The performers also wear ornamental crowns. The less important characters wear smaller crown and costumes made of bright colored fabrics, but with less glitter. The soldiers wear hats fitted with quills and carry swords and shields.

Dance and instrumental music are combined in this art form.  The stories are presented with detailed gestures and well-defined body movements, in tune with the rhythmic music and complementary percussion. Foot stamping dance steps, fighting and fencing are essential parts of this performance. Stamping hard and jumping high, the performers swing with the beats while reciting the songs. The songs are sung by the artists themselves in loud voices to match the gestures and steps of the dance. Kalasam is the name of the dance segment (similar to the punctuating pure dance patterns of Kathakali) between verses in a performance.

Reading of chuvadi texts reveal that tweaking the stories was a common practice and was intended to teach the Roman Catholic doctrines and to instigate the will of the new converts against other religions. One of the most popular and oldest play is Karalsmaan chavittunatakam – the story of emperor Charlemagne the great, the first holy Roman Emperor, composed by Chinnathambi Annavi. A quick review of the historical King Charlemagne and the King Karalsmaan in the Chavittunatakam reveal that the latter has more fictional elements than the historical King Charlemagne.

In the play Karalsmaan attacked and defeated the king of Turks (Byzantine empire at that time) and his nephew Roland married the king’s daughter. The historical Charlemagne was crowned the Emperor of the Romans by Pope Leo III. He did not lead any military campaigns against the Turks. But he did lead a military quest which resulted in the unification of Western Europe. He also massacred 4,500 Saxons in an attempt to convert them to Roman Catholicism from their native Germanic Paganism. Though Roland is mentioned only in passing in the historical records, he is featured as the hero in the song of Roland. And he did not marry any princess.

Over the years the church denounced chavittunatakam and it was taken over by the people in the coastal areas. Other sects of the Catholic Church considered this form inferior as the performers wore make up and blond wigs and spoke in an unfamiliar language. As the costumes, stories, and actions were of a mixed origin, classical Indian dance traditions also did not acknowledge these performances. However, the art survived and thrived among the fishermen of coastal Kerala.

There was a resurrection of this art form in recent years. Both Kerala Folklore Academy and Krupasanam, a study center, encourage and promote this art form.

Old Tamil language in chavittunatakam became a stumbling block for the latter-day Malayalam speakers.  These days the drama texts are written Malayalam. But writers still use the rhyme schemes found in the early Tamil texts.

The tradition of months of training is no more, and now shorter practice sessions are the norm. In old days, the most popular play Karalsmaan Chavittunatakam had a running time of fifteen nights. Today the duration of the plays is around three to four hours. Over the years two distinct styles of chavittunatakam has also evolved.

Chavittunatakam was staged at the Muziris International Biennale as the only maritime dance drama. This new attention and wider audience has also resulted in bold new themes. This art form has now abandoned its religious identity in some newer plays, and has transitioned to new areas of theater, stories, and performance.